This article was first published on FloridaBar.org, October 10, 2019

As part of a project to document the history of The Florida Bar, the former presidents were asked to comment on the same three questions.

Q: How would you like to be remembered as a lawyer and a former Bar president?

Hawkins: The opportunity to serve as president of The Florida Bar was a much “richer” experience than I anticipated. Certainly, the opportunities to speak across the state about the Bar and its programs, to influence the shaping of certain programs and policies, and to encourage new lawyers and law students to have high aspirations all illustrate the uniqueness of the office and the unparalleled nature of the opportunities that it brings. To capture this point, I recall a conversation with a prominent lawyer that arose during the final weeks of my tenure. That lawyer asked what I would likely miss the most when my term ended. After talking around this question, I concluded that I was going to miss the platform. The notion of having a platform to influence the profession and to have influence within the legislative process and within the Florida Supreme Court and with other bar leaders was extremely unique. I also came to fully appreciate how deeply respected The Florida Bar has become. I came to understand how the state of Florida was uniquely positioned to face challenges that often arose earlier here than in other states. Until serving in Bar leadership, I never grasped the importance of that point.

A critical issue did arise in 2011-12 that raised serious concerns for Bar leadership. In particular, there were indications in the media that substantial funds were being raised outside of Florida to launch attacks on the three Supreme Court justices who were on the ballot for merit retention in the fall of 2012. The seriousness of this issue was heightened by the fact that multiple Supreme Court justices had just been defeated for retention in Iowa. A national summit was conducted on this topic in Missouri and Justice Sandra Day O’Connor chaired the summit and presented compelling remarks. I was left with a strong belief that the average American did not have a good grasp of the precious role that judges play in America’s democracy. Further, I was convinced that the average voter does not really understand what trial judges do or really understand the function of appellate judges and Supreme Court justices.

In close collaboration with other key leaders on the Board of Governors, a decision was made that the Bar would explore launching an educational effort with a view toward providing greater voter education on the role of the courts as a lead-up to the November 2012 election. I recall that a vast number of speeches were given, that numerous collateral materials were generated and disseminated regarding the Bar’s “The Vote’s in Your Court” program, and that I was extremely gratified by the scores of lawyers who stepped up to assist. It is important to recall that in preparation for “The Vote’s in Your Court” program, focus group research was conducted with voters in various regions. The results of those focus groups made it clear that the average voter simply had no real grounding or understanding of the fundamental roles judges play in America’s democracy. With that information, I was convinced that without such understanding, the governing principle of “the rule of law” would be subject to the mercurial will of well-funded political actors who had agendas to defeat various appellate judges and justices up for retention. In hindsight, the formation and implementation of the “The Vote’s in Your Court” program is perhaps the most important accomplishment during my tenure.

Q: How do you think the legal profession has changed over the years?

Hawkins: Sometimes when people refer to change there is an implicit suggestion that change is for the worst. I prefer to think that in connection with The Florida Bar and the legal profession, that there has been evolution and that the evolution has indeed reflected change. However, I do not necessarily think that the changes which have occurred are necessarily for the better or worse. Importantly, the real issue is how one responds to change.

When I started practicing in 1985, I would often be tasked with reviewing large collections of documents. This type of work consumed significant amounts of time for young associates and paralegals. Today, in dramatic contrast, such reviews are often conducted electronically, and the deliveries of documents are often made electronically. With the presence of electronic review and production, the time demands associated with these endeavors in certain ways have lessened significantly. One would think that the expense of litigation has lessened as a result. However, I am not convinced that is the case.

From a philosophical perspective, I have concerns that as the profession has evolved, it has become less “noble” and less civil. Further, I have concerns that lawyers have less stature in their communities than they once had. As a child, I was raised to believe that when lawyers spoke in a setting, you could always trust what they said to be true and correct. Today, I am not sure the average citizen holds lawyers and their words to the same level of esteem. Obviously, there are many examples of lawyers who represent the highest integrity in our community. However, across the board, I have grave concerns that the legal profession no longer occupies such a high position.

Q: What suggestions do you have for improving the profession or for young lawyers?

Hawkins: It appears to me the profession is undergoing structural upheaval. I do wonder whether Bar leaders need to stress that the profession represents a calling. In other words, that we should use language that emphasizes the importance of being “called to the bar” like a minister being called to serve the church. I realize that in some quarters this may sound naive, but I feel that the high mindedness which once permeated the culture of our profession has been dwarfed by the “business pursuit side” of law and the sole emphasis on earnings that are attached to a law degree. I continue to appreciate that across the profession, there are those very noble lawyers who endeavor to serve the profession and their clients with honor. 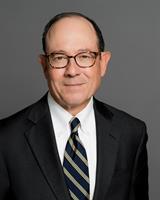